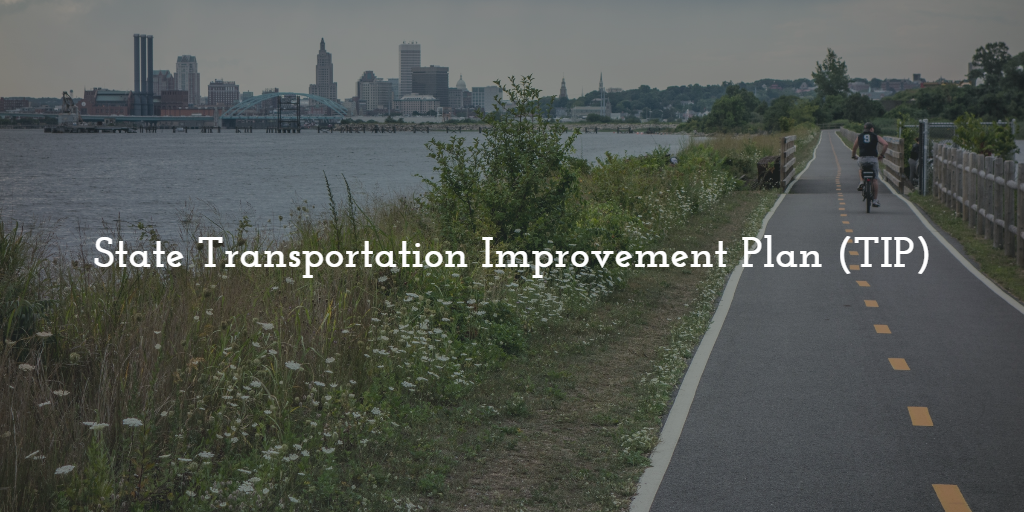 The Statewide Planning Council is currently accepting public comment on the draft State Transportation Improvement Plan (TIP), which outlines all the major transportation investments that will happen for the next ten years. On May 26th, there were two public meetings where public comments were accepted. On the Statewide Planning website, it states “The public comment period for this document begins on April 25, 2016, includes the two (2) public hearings outlined above, and closes on June 26, 2016. All comments on the draft FFY 2017-2025 STIP must be received by June 26, 2016.”

That means there’s still time for you to chime in and let the Statewide Planning Council know that the state needs to invest more in bike/ped projects in the first four years, and not just kick the can down the road to the later years.

See the Statewide Planning website above for how to submit your comments. The comment RIBike submitted at the public meetings is below.

Dear members of the TAC:

The RI Bicycle Coalition has been paying close attention as the 2017-2025 Transportation Improvement Plan has been in development, and we would like to provide comment as you consider the approval of the draft plan today.

The Bike Coalition was supportive of the RhodeWorks proposal because the resulting increase in funding for the Transportation Alternatives Program (TAP) was significant. However, this increase has still only resulted in four bike projects that are scheduled to be constructed in the next ten years: Blackstone River Bikeway Segments 8A, 8C, and 8B-1 (all in Woonsocket), and the two bridges (not even the paving) of the final section of the Trestle Trail in Coventry. 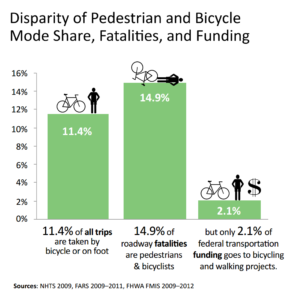 Furthermore, this plan’s funding of bike and pedestrian infrastructure is even more out of step with usage than the national average. Nationally, 11.4% of all trips are taken by bike or by foot, 14.9% of all roadway fatalities are pedestrians & bicyclists, but only 2.1% of transportation funding goes to projects designed for these users. In our four-year TIP, only 1.9% of funding goes to TAP. We must increase that number if we want to reverse the financially and environmentally unsustainable dependence on motor vehicle transportation.

One reason the Bike Coalition nonetheless found it palatable to support RhodeWorks was that we expected that all of the bridge & paving projects consuming the bulk of the funding would be constructed with complete streets in mind. If you’re not familiar with the term, “complete streets” means streets that are built to be safe and comfortable for all road users, with the inclusion of sidewalks, bike lanes, and real transit accommodation in addition to basic motor vehicle striping. However, it is concerning to us that the phrase “complete streets” only appears twice in the draft TIP. If we want to build a transportation network in our state that makes people and jobs want to locate here, we cannot continue dismissing vulnerable road users as an aberration when we design our streets.

While the most obvious shovel-ready bike projects around the state, as well as several vital bike improvements in the City of Providence and on Aquidneck Island are present in the draft plan, beyond that we are disappointed with how statewide bike priorities were included or not included. Eight bike projects included in the previous TIP were completely omitted from this draft plan, and a critical segment of the Blackstone River Bikeway through Central Falls prioritized as “high” in our submission is also absent.

A few final notes about process:

In sum, if we wish to increase the proportion of Rhode Islanders who get around by bike, we must stop treating this mode choice as an “alternative” and instead consider it an equally valid transportation decision. As Rhode Island is particularly vulnerable to climate change, it is our responsibility to change the conversation to encourage more sustainable transportation decisions such as bicycling. In the Transportation 2035 plan, we articulated a multimodal vision for the state. This TIP does not put us adequately on track for that vision, and we encourage future updates of the TIP to include a more fair funding allocation.