advocacy: noun the act of pleading for, espousing or recommending

We move our legislative agenda forward by developing new language for laws, cultivating sponsors in both houses of the RI General Assembly, testifying at committee hearings, mobilizing supporters and addressing legislators’ questions and concerns.

You can have an impact and make a difference – there are many ways to participate. 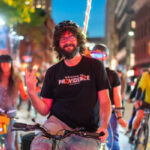 I have a project that I’ve been working on for a while now, a map of Rhode Island generated entirely by the GPS data from bike rides that I’ve done. With that in my head, I’m always looking for new roads to ride, and different routes and shortcuts get prioritized. It’ll keep me busy for years.
...read more