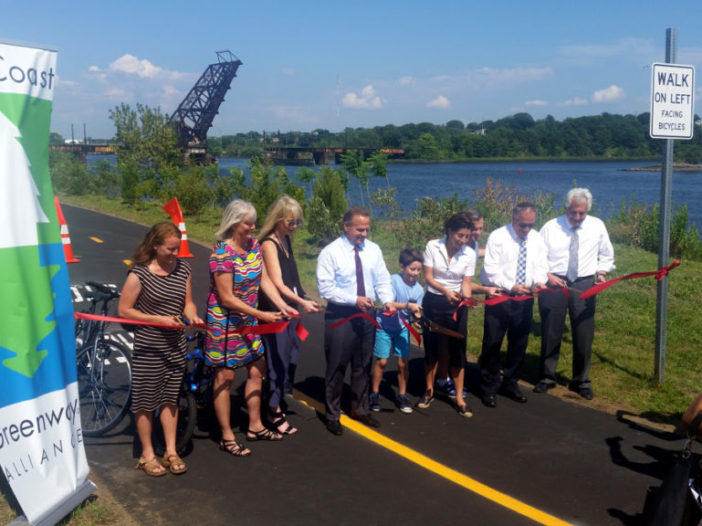 Gano Street in Providence’s Fox Point neighborhood may have bicycle signage and shared lane markings but for residents and visitors on two wheels, the experience is less than comfortable.  High traffic volumes and a relatively narrow road width make Gano Street a tricky place for cyclists and pedestrians to navigate.  Fear not, there is a new bike path in town, and this one offers a much more enjoyable alternative.

On Thursday, August 10th, public officials and bicycle advocates gathered to celebrate the opening of an additional 0.7 miles of the Blackstone River Bikeway.  The segment extends from Gano Street at Trenton Street to Pitman Street (accross from Wetherby Park).  The Blackstone River Bikeway is a developing 48 mile bicycling and walking route connecting Worcester, MA and Providence, RI, and is nearly 40% off-road. The Blackstone River Bikeway is also an important part of the East Coast Greenway (ECG) network, a developing 3,000 mile bicycling and walking route connecting communities form the Canadian border to Key West, Florida.  Today, over 31% of the entire ECG route includes traffic-separated facilities.  With the inclusion of this new segment into the national network, Rhode Island’s section of the ECG will be over 64% complete.

Thanks to strong partnerships between the Rhode Island Department of Transportation (RI DOT), RI Department of Environmental Management (DEM) and the City of Providence, non-motorized users have an alternative option to Gano Street and can enjoy the scenery along the Seekonk River.  The new facility also connects neighborhood amenities including Gano Street Park, the future site of the Waterman Street Dog Park and the East Side Market Place.  Currently, there is a 0.2 mile gap between the southern terminus of the path and India Point Park.  It is a priority of the East Coast Greenway Alliance (ECGA) to see this gap close in the near future.  Not only does this short on-road transition on Gano Street include treacherous on and off-ramps for I-195, the sidewalks are crumbling and in great need of repair.  The City of Providence and RI DOT are working to find a solution to close this critical gap.  To the north, the ECGA is working with the Seekonk Riverbank Revitalization Alliance to advance design work to improve bicycling and walking conditions along River Road and make the connection to the Blackstone Boulevard.

Miss the ribbon cutting or just want an excuse to go on the trail? Join the ECGA staff and volunteers along with local partners for the East Coast River Relay, which will be coming through Providence on September 4th, 3-5pm.  There will be a guided walk along the new Blackstone River Bikeway segment, as well as a a paddle and bbq event with local partners including the Seekonk Riverbank Revitalization Alliance, The Blackstone Parks Conservancy, The RI Rivers Council, The Waterman Dog Park and the Fox Point Neighborhood Association.  For more details click here & here.

For more details on the Blackstone River Bikeway please visit the Blackstone Heritage Corridor Bikeway Page or   For questions about the East Coast Greenway, please contact Molly Henry at molly@greenway.org.