Rember that linear park which is supposed to be worked on?  I finally received an update from RIDOT about the tentative timetable: At this time we expect that the construction of the Washington Pedestrian Bridge will start in the spring of 2011.  We expect the duration of the construction to take two years.  Also, we…  read more 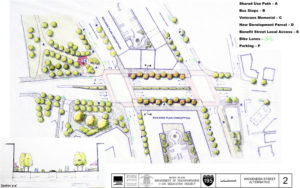 The folks over at Greater City Providence did a great job summarizing the alternatives RIDOT presented this past Monday for the Wickenden St./195 interchange.  I wasn’t able to attend the meeting and am hoping that anyone who was in attendance would add their thoughts to this post.  My understanding was that the following option was…  read more

RIDOT and PVD city planning have scheduled the follow-up meeting for street designs emerging from the teardown of “old” I-195.  Changes to the earlier design (based on earlier public feedback) will be presented, including new alternatives for the Wickenden/Point/Benefit/South Main/South Water clusterf#*k interchange.  Your participation is crucial to ensuring livable streets in Fox Point and…  read more

Good neighborhood meeting tonight on the Broadway streetscaping project, though sparsely attended (despite heavy promotion by the city, West Broadway Neighborhood Association, and Providence Bicycle Coalition). Most comments were related to heavy truck traffic and speeding. Not one beef about the bike lane component of the project. Councilman Lombardi appears to favor it. It looks…  read more

In NYC this summer, Mayor Bloomberg will shut down a section of Broadway in midtown to become a bike-ped paradise. But here in the “Creative Capital”, the long-planned bike lanes on Broadway are in danger of being killed before the paint hits the ground: rumor has it that a well-placed member of the City Council…  read more

We received the following question via our online contact form: Hi there! I am currently living in NYC and I am planning on moving to Providence within the next year, but my big concern is being able to ride my bike, so im curious if you can tell me how bike friendly is Providence? I’ve…  read more