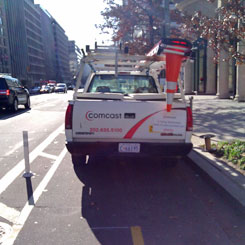 What if roadways were treated with the same “respect” as bicycle and pedestrian facilities?  This is exactly the question The London Cycling Campaign is asking on a recent blog post.  I do encourage everyone to have a look at the images they posted, none of them will likely shock you.  I’m sure we all have such examples around here, please feel free to forward them our way, with a description of where they are, and we will see if we can’t put together or own little collage.

It did get me to thinking though.  What is it about us cyclists that we are willing to put up with such treatment?  If motorists were treated in a similar manner, how would they react?

I was riding home along the East Bay Bike Path last week, ducking under low hanging branches.  After about the second one, I thought to myself… I should bring some pruners next time I ride along here, so I can cut back this brush.  Then I had the exact same thought as the LCC page is asking, how would motorists react to the same situation?  Would they take matters into their own hands, bring the chain saw to cut down the branch affecting their driving or would they call someone from DOT and demand that it be fixed?  I’m guessing the latter.  If this is the case, what’s the difference?  Am I the only one who would think of trimming back brush?