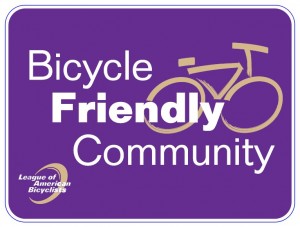 There has been much more media attention paid this year to the League of American Bicyclists Bicycle Friendly States rankings, with seemingly every local news program focusing on Rhode Island being ranked 39th among the states and last among New England States.  In trying to come to terms with could be interpreted as an indictment of the effectiveness of bicycle advocates in creating the bicycle friendly environment and living up to the promise we as an organization and volunteers have made, it’s all to easy to question the methodology and numbers.  What does 39th mean?  What if there were scores instead of ranks, what’s the spread of scores for all states?  How much of a difference is there between states?  It’s also hard to reconcile a 39th in bicycle friendliness with being ranked 13th safest state to ride a bicycle in the 2012 Benchmarking Report for Biking and Walking from the Alliance for Biking and Walking.  So what does it mean?

When coupled with Rhode Island’s consistency as being last among New England states for the last 4 years, with rankings of 35, 29 and 28 for 2009 through 2011, it shows that while we enjoy a low rate of injuries and deaths among bicycle users, new people are not adopting the bicycle as a commuting instrument, so our mode-share numbers continue largely unchanged.  Other items that tend to have a positive effect on creating safe environments that encourage and support people using bicycles more aren’t significantly changing from year to year.  Total miles of off-road and on-road accommodation doesn’t increase much year by year with only a few million dollars spent in the state bicycle program.  This all translates to people aren’t seeing the bicycle as a practical addition to their daily lives.

While we have not received detailed feedback from the LAB, their report card gives an overview of the features that are perceived as underdeveloped or lacking in Rhode Island.  The Blueprint for Bicycle Friendly more fully defines what the Bicycle Friendly America recommends. But first, before taking on what we can learn from the scores,two items of disagreement with the report card.

The Top Tip for Success suggests that amending our safe passing law to specify a minimum safe passing distance. While it does not specify an exact minimum distance, for most adult bicycle users,  the safe passing law that went into effect in 2010 stipulates a larger distance than any other state, and heck of a lot easier to “eyeball” at roadways speeds.   Under the “Signs of Success” heading, the state’s existing transportation planning documents were apparently not checked, as the most recent transportation plan for the state  includes elements and goals for the bicycle transportation network of the state adopted in 2008.

What can we learn from the report, what are we missing?

Legislation and Enforcement was our highest rating, with a 3 out of 5.  In this category are items such as lane use laws, education for law enforcement and judges, and improved laws used as part of driver education and to hold operators accountable for negligent actions.  To this end, RIBIKE has been working to have a “Vulnerable Roadway User” law enacted with Senator Sosnowski and Representative Tanzi taking the lead for this legislation.  I’ve been told RI already has a bicycle law training requirement for law enforcement officials.  Investigation of any requirements for traffic court judges would be warranted after checking how many bicycle users are receiving citations and appearing in traffic courts and on what charges.

Policies and Programs received a score of 2.  This category covers state laws and DOT policies for roadway planning, off-road recreation plans, and staff time dedicated to bicycle/pedestrian issues.  In this regard, many organizations concerned about people and transportation systems are working to get a revised state law for Complete Streets passed in the House (already passed by the Senate).  This would improve and better define on the existing law, passed in 1996, requiring consideration of bicycle and pedestrian needs in most RIDOT projects.  DOT policy on Rumble Strips usage would also fall within this category.  We are now engaged with DOT to determine existing policy.

Infrastructure and Funding earned another 2, largely because the state does not have any existing dedicated funding mechanism for bicycle and pedestrian programs encoded into law.  While this is true that there is no state budget level for this item, there is flexibility to work with state DOT to investigate a safety education campaign for bicycles, similar to the push on motorcycle safety visible around the state.  Infrastructure development is also occurring at the rate that RIDOT’s promised funding and the Transportation Improvement Plan dictates for development of infrastructure projects.

Education and Encouragement is the last category which scored a 2.  Encouragement comes almost entirely from the bicycle riding populace by supporting and enabling others to try bicycle use and providing resources.  Riding Safety Classes and similar need to be offered more often at low or no cost teach existing and prospective riders of the limited dangers of riding and the skills to avoid those dangers.  Bike To Work Events and Community rides such as those hosted by WRWC and Recycle-A-Bike and even Critical Mass, serve to give riders support and connections to others.

Evaluation and Planning was the lowest category, scoring a 1 out of 5, representing the state’s annual planning inclusion of bicycling, existing bike commuting rates and accident rates.  Bicycle mode share for commuting to work is less than 1% (0.3% according to the Benchmarking Report) and has remained largely unchanged for the last decade.  Anecdotally, we are seeing more people riding bicycles on a daily basis, but no formal counts have been done to estimate total bicycle usage in the state so we rely on estimates from the American Community Survey.  Our fatality rate is certainly very promising, though I haven’t been able to obtain any data on injury rates for bicycle users.  Individual projects that RIDOT engages on tend to need to include public input into deciding how to best accommodate bicycles within the budgetary and timing constraints of the project.  This is a long slow conversation that needs to be had repeatedly as new road projects are started, because its far to easy to say no one is riding a bike there so there is no point in including bicycle facilities.

One of the biggest increases in rates of bicycle use is directly seen by installing bicycle facilities that give users a safer place to use their vehicle and get used to the road.  Unfortunately, despite RIDOT’s continued commitment to continue developing bicycle infrastructure, getting dedicated lanes, where appropriate, on roadways is not happening very often (see recent DOT press release).  Every town should adopt a Complete Streets ordinance and sticking to it and the state’s complete streets law needs to be more than advisory.  If done within the scope of an existing project, many times the improvement for bicycle users is a minuscule part of the project.

Lastly, there are no Bicycle Friendly Communities or Bicycle Friendly Businesses within the state.  Engaging with employers and towns to undertake these projects will start to create the environment that pushes up to the state level and serve as a second level of encouragement by creating communities and easing the transition.  Newport is preparing to submit theirs, and it is very like that Providence could be on that path within the next year, but we as residents and advocates need to let the city government that this is an important part of our lives as residents and that creating bicycle friendly streets and business districts has direct economic benefits.

When being interviewed for a story by WRNI, I was asked why we are consistently scored so poorly.  I can only assume that since we do not have  large numbers of bicycle users being injured in killed, it is difficult to get state departments and legislators to take up projects, policies and legislation that could improve conditions for bicycle users.  It’s also difficult to get commitments in a time of fiscal crisis when the first thought about any proposal is not even how much will it cost, but that there’s no way to pay for it before a cost has been determined.

Take Florida as an example of how a state with a safety problem (last on the 2012 Benchmarking report for bicycle user safety) is reacting to improve its bicycle friendliness.  Ranked 32nd, 12th, 7th and 21st in the BFS for the last four years, that state is taking their safety issues seriously by spending at a higher percentage than any other state on a safety improvement plan at the state level, established goals for increasing safety, and established an advisory panel for bicycle and pedestrian safety.  But Florida’s issues aren’t Rhode Island’s issues, so their solutions won’t necessarily the fit here.

In itself, the ranking compares RI to other states, who are all working to varying degrees to improve their transportation systems and increase road user safety.    Unless the state’s legislators, towns, populace and bureaus make it a priority to be ranked well and increase rate of use among commuters, we will continue to be scored in the bottom third of states, and last in New England.