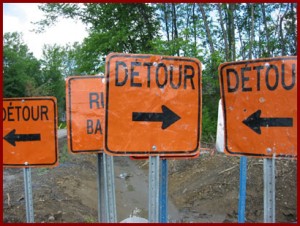 I tweeted a few weeks back about how pleased I was to see small packs/gaggles/whatever of students in Barrington riding to school in the morning.  It was a clear sign that they were doing something right, encouraging their students to transport themselves to school and it was working!

Unfortunately, the following discussion came up on the Bike-to-Brown email list:

My son and his friends have been USING the bike path to get to Hampden Meadows School this year.  Yesterday, four of them headed to school as usual, but their way was blocked by this construction site.  The kids didn’t know what to do.  There were no signs indicating a detour and no way around the work site.  Since they are not supposed to ride on roads, they decided to turn around and head home.  My son caught the bus.
I rode with my son this morning.  There is a back hoe and the grass has been removed on either side of the bike path where it meets middle highway.  This corner is where the Barrington Country Club backs up to the bike path.
This really made me think about the need for signage on the bike path when parts of it are closed.  The kids really had no idea what they should do to get around the construction. There were options, but none were obvious or obviously safe.

How sad is this, kids trying to get themselves to school only to be thwarted by a lack of realization that people actualy USE the bike path to go somewhere.  I would say it was another sign of the discrepency between how cars and bicycles are treated, but that would assume detours are regularly setup for automobiles when work is being performed.  Being from out of state originally, I can attest to how challenging a Rhode Island “detour” can be to follow, when you have no idea where you are or the layout of roads.

More importantly though, I think this points to the fact that we need to work with our local agencies whenever they are performing work, to try and ensure that detours are posted.  As we encourage more kids especially to get on their bikes rather than hitching a ride with a parent, it’s key that we provide them with a safe environment in which to travel.  If there is a bike path available to them, all the better, let’s just make sure workers know they are actually USED for transportation.

We have reached out to RIDOT to see if they know anything about this construction project and will do our best to educate local agencies of the need to be conscientious of the needs and different requirements of cyclists.  If you come across a construction site like this, I’d encourage you to take a few minutes and talk with the construction workers.  Be nice, but let them know what impact they are having on cyclists.  Who knows, perhaps one of them will go to the extra effort of posting a detour next time around.