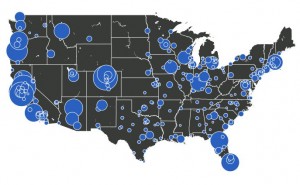 A recent post on governing.com provided an interactive map of US bike commuting activity.  It’s worth a few minutes of your time to take a quick look.  A few things to note:

Presumably, this data is compiled from information households provide.  If this is the case, then I’m scratching my head over why some municipalities report zero bike commuting and others have no reported data? 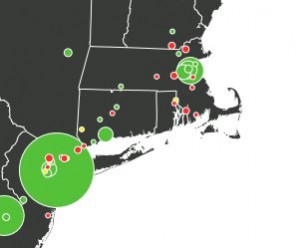 Perhaps even more important than this map is the interactive changes map.  The subset of the map at the right shows a net decrease of bike commuters between the 2006 census and the 2011 census.  While NYC and Boston (Cambridge really) show dramatic upswings in bike commuting, we are heading the other direction.  In my mind, this is a clear indication of what an impact those in charge, mayors in both cities, can have.  It also shows that our work is far from done.

Hopefully, we will see Newport on this map after the next round of census numbers come out?