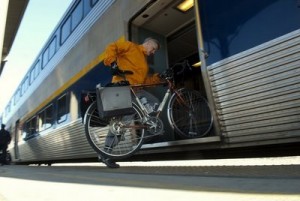 Public Transit, Personal Automobile, Bicycles and Feet can all combine to make for a time-effective way to commute to and from work. While RIPTA schedules aren’t always what you need, combining a RIPTA Park and Ride facility, bus ride and bicycle ride can easily make getting into and out of the city less expensive and stressful.  The time spent riding the bus can be safely spent reading or catching up on needed rest. Coming from or going to points along the commuter rail line? Park at a train station for the day, bring a folding bicycle (MBTA does not allow full size bikes on peak hours trains) and ride the last few blocks to the office.  Once at the office the bike doesn’t need to be parked in a paid garage or lot, there are a lot of bike racks in downtown, and if lacking, no lack of sign posts, possibly directly outside the building door or inside.

Personally, I combine RIPTA with my bicycle frequently. Taking the bus from somewhere like Oakland Beach in Warwick to Kennedy Plaza and then riding from downtown to wherever necessary. The use of the bike allows me to increase my range and not be forced to wait for the next bus going exactly where I want to go, assuming there even is one. Occasionally I’ll take an MBTA train with a bicycle to get to Boston without the expense and frustration of parking and the frustration of 95N and 93N traffic jams.

Or, as Anj indicated in the comments for Considering Biking To Work or Play?, a 28 mile commute between Washington County and Providence.

While the video embedded below focuses on the commutes in the San Francisco Area, it certainly shows the wealth of possibilities available for long commutes in dense, urban areas with notorious traffic.