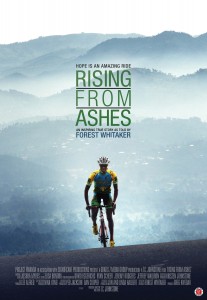 Rising From Ashes, the award-winning feature-length documentary about Team Rwanda, will have an encore screening at the Cable Car Cinema and Café  in Providence on Tuesday, February 18 at 8:30 p.m. Those who had tickets to the shows on January 21 and could not attend because of the bad weather that night, will be contacted.  Your unused tickets will be honored at the show, but you must RSVP beforehand!

Rising From Ashes is a joyous and uplifting independent film about the development of a national cycling team in Rwanda, a country still affected deeply by the genocide that tore the East African nation apart in 1994.

Advance tickets are $10 and can be purchased online at www.cablecarcinema.com. Tickets at the door will be $15.

From the Press Release:

Rising From Ashes is a joyous and uplifting independent film about the development of a national cycling team in Rwanda, a country still affected deeply by the genocide that tore the Two worlds collide when cycling legend Jacques “Jock” Boyer moves to Rwanda in 2006 to help a group of struggling survivors of the genocide to pursue their dream of creating a national cycling team. Members of the fledgling team were children left orphaned by the genocide a decade earlier. Their pasts are painful. As they set out against impossible odds, both Boyer – fighting his own past demons – and the team find new purpose as they rise from the ashes of their pasts through remarkable achievements, both big and small. The documentary tells a story of redemption, hope and second chances. It is not about the bike; however, the bicycle becomes a tool that has helped change a nation.

Rising From Ashes Trailer  from T.C. Johnstone on Vimeo.