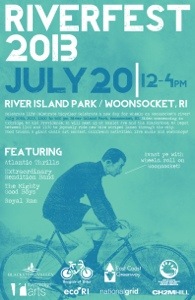 Riverzedge Arts in Woonsocket is hosting Riverfest 2013 on Saturday, July 20. The event takes place in River Island Park from noon to 4. Rides to the celebration of Woonsockets newly installed bike lanes and signed routes are scheduled. Arrive at the event in style, by bicycle.

Below Is the full text announcement sent out today.

Calling All Cyclists and Bike Stores:
On Saturday July 20, 2013, Riverfest 2013 will celebrate life, bikes and the Blackstone River in Woonsocket.

Join the low-key, recreational bike rides to Riverfest ending with a bike parade on new sharrow lane connectors or sell your wares and advertise you shop in our vendor and exhibitor area:

Ride information is as follows, and please sign up with the appropriate ride leader to get further information:

From the north, gather at River Bend Farm in Uxbridge. (Park staff asks that we park vehicles in the field north of the visitor center.) Leaving at 9 am, the group will ride into Uxbridge center, then follow Route 122 into Blackstone MA. A stop on Canal Street at the former Blackstone Depot site will allow riders to rest on the bridge overlooking the fast running River. From here, you can also see evidence of the construction activity to build this additional, 3 1/2 mile stretch of the Bike Path.

Group leader Bob Billington (BVRI@aol.com) will then lead the group into Woonsocket and to the RiverFest at River Island Park, following the newly marked Bike Route. This route was adopted by the City Council and is marked with “sharrows” and signs.

From the south, the group will ride the off-road Bikeway along the Blackstone River, past dams and waterfalls, and into the Woonsocket Rivers Edge Recreational Complex and soccer fields. Group leader Eric Weis (Eric@greenway.org) will then lead the group through Woonsocket to the RiverFest at River Island Park, following the newly marked Bike Route. This route was adopted by the City Council and is marked with “sharrows” and signs.