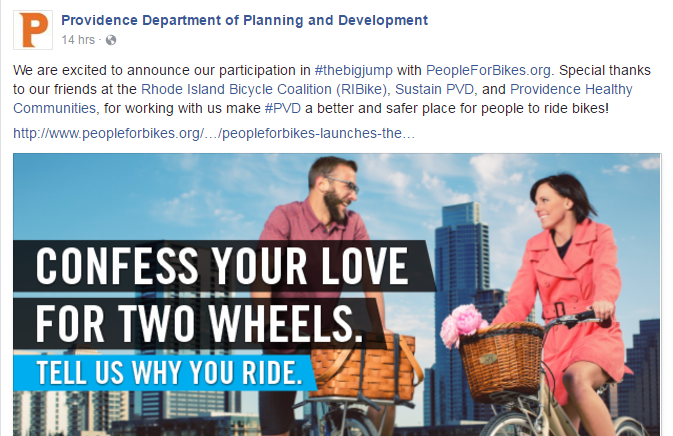 PeopleForBikes, one of the driving forces behind making places better for bicycling in the United States, has a new program called the Big Jump Project. Yesterday, they announced the ten cities nationwide that would be participating, and Providence made the cut! This is not specifically a funding program, rather it will connect us with national experts on improving cities’ bike networks. However, we should still be thrilled that our capital city is being recognized as one of the priorities nationwide for being on the cusp of dramatic improvements in bicycling infrastructure.

Providence’s application was specifically focused on the City Walk corridor, which could one day be the spine of Providence’ bike network: connecting India Point Park to Roger Williams Park by way of the 195 land, Friendship Street, and Elmwood & Broad Streets.

Over the course of the next three years, these cities will be laboratories for innovation, ultimately illustrating the ways in which U.S. cities and towns can tap into bicycles to improve the health and vitality of their communities. Each city will annually receive the equivalent of $200,000 in in technical support from PeopleForBikes to support the development of bike infrastructure and programs that encourage biking in a given neighborhood; an additional $50,000 in local matching funds from the city, community partner, or local foundations each year will also be contributed to the program.

Thanks to our great partners at Providence Department of Planning and Development, SustainPVD, and Providence Healthy Communities for putting this application together, and at the Jewelry District Association and the Providence Foundation for getting the City Walk vision to a state of readiness to take this next big jump! We look forward to being part of the ongoing process.