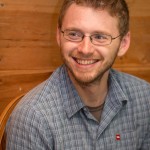 The Rhode Island Bicycle Coalition (RIBike) is pleased to announce the hiring of the organization’s first staff person, Alex Krogh-Grabbe, in the role of Program Director.

Since 2010, RIBike has advocated for bicycling in the Ocean State with only a volunteer board and members. In 2015, the Board of Directors decided that to realize the organization’s vision of growing bicycling culture and infrastructure in the state, it was critical to hire a staff person to build membership, increase government engagement, apply for grants, and organize events.

Alex Krogh-Grabbe moved to Rhode Island in June 2014 from Amherst, Massachusetts. In his year living in Providence, he has become active in both the bike advocacy and political spheres. Before coming to Rhode Island, Krogh-Grabbe received his master’s degree in urban planning from Tufts University, ran an economic development nonprofit, worked in financial development at a public radio station, and trained as a community organizer with the Public Interest Network. Krogh-Grabbe’s name is pronounced “crow GRAH bay”.

Krogh-Grabbe’s bike advocacy in the state has already shown several successes, including preserving funding for the completion of the northernmost section of the Blackstone Bikeway, opening the George Redman Linear Park on weekends before its official completion, and work with the Governor’s office on the RhodeWorks transportation plan. He also started a popular series of bike-focused socials called Bike to Beer that will continue under RIBike’s umbrella.

“Alex’s experience and enthusiasm are an excellent fit for this position,” said RIBike board president Matt Moritz. “The board is looking forward to ensuring he succeeds in expanding RIBike’s impact and making RIBike the first place people think to go when they have a question about bicycling in the state of Rhode Island.”

While organizational development and member recruitment will be RIBike’s biggest focuses in the initial term of Krogh-Grabbe’s time with the organization, he said he will also prioritize building relationships with other organizations in the state and nationally, both bike organizations and affinity organizations in other issue areas. He began work on June 29th.

“There are so many benefits of bicycling, both for individuals and Rhode Island as a whole,” Krogh-Grabbe said. “it’s our goal to make bicycling a fun and attractive option for transportation and recreation for everyone in the state.”

The mission of the Rhode Island Bicycle Coalition is to promote and enable bicycling as a healthy, enjoyable, efficient and environmentally friendly mode of transportation in and around the state of Rhode Island.

Press inquiries on this topic should go to Margherita Pryor, Vice President of RIBike, at info@ribike.org or 401-595-4186.