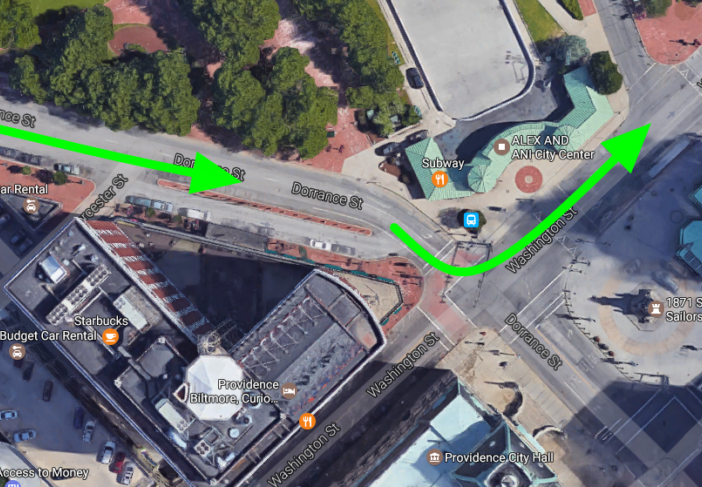 If you don’t feel like reading this whole explanation, come to 444 Westminster St in Providence for the public meeting about the future of Kennedy Plaza at 5pm on February 16th. If we can get a big group of RIBike members there, we can improve bicycling conditions at the heart of Rhode Island’s capital city.

[EDIT: this issue is not on the agenda for the BPAC meeting, though it may be touched upon. Definitely come to both that and the KP meeting, though, as both will be interesting.]

Recently, the East Coast Greenway Alliance (ECGA) has been working with RIBike to move the officially designated East Coast Greenway route northeastbound from Weybosset Street in downtown Providence to make use of the new parking-protected bike lane on Fountain Street. We’re talking about this because our board serves as ECGA’s state committee for Rhode Island, which means we need to approve any adjustments to the official Greenway route.

While we love the symbolism of the new Fountain Street lane, and think it provides a real improvement over the multi-lane speedway that bikes were stuck in beforehand, our board expressed a few concerns about the route change:

Thank you for speaking up for safer streets for bicycling, and we hope to see big crowds at both of these meetings!