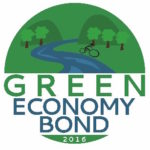 We are excited that the Green Economy Bond, with its potential $10 million for bike paths statewide, has passed the House Finance Committee! This was one of the biggest hurdles to this funding happening, and it will be voted on next Wednesday by the full State House of Representatives for inclusion on the November ballot.

This pivotal step towards a more bike-friendly Rhode Island is only possible because of the hard work of a broad coalition of 14 diverse groups, including the Bike Coalition. We have been working for the past thirteen months to make this breakthrough happen. While both the full House of Representatives and voters need to approve the bond, we are optimistic that both with vote yes for bikes and the environment.

The Green Economy Bond is for $35 million, and its seven different areas of investment across Rhode Island will all provide triple bottom line returns to the state. The budget breakdown is as follows:

The $10 million dedicated to State Bikeway Development is a great start towards completing and connecting our network of bikeways in the state, which is already a nationally significant tourism asset. Traditional funding sources for bike paths are not getting the job done, and in addition to telling RIDOT we need more bike infrastructure through normal channels, we’re excited that this innovative funding for bikes may become available!

Stay tuned! Thanks again to all the people and groups that have put so much effort into making this happen, especially RIBike board member Rep. Teresa Tanzi of Wakefield. Without Rep. Tanzi’s hard work, paths such as the South County Bike Path would face a much steeper funding challenge.