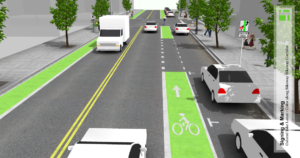 We were thrilled to participate today in a workshop on bike infrastructure design standards. The workshop was organized by Providence DPW’s Craig Hochman for City staff involved in such things, and presented by national expert Bill DeSantis of consulting firm VHB. We learned some interesting things that we thought you might be interested in.

There are three “standards” that traffic engineers use when designing bike/ped infrastructure.

These three publications hold the most legal weight, and are the bedrock of what all traffic engineers nationwide use. There are other guides too, including “references” such as

These guides are all useful for providing ideas, but what engineers mostly care about is the “standards”, because the more unusual a street design, the more they worry about opening the city up to getting sued if someone gets hurt. The conflict arises because the “references” often include more progressive bike-friendly designs than the slow-to-update “standards”. There is some flexibility, though, that allows engineers to design better streets. This workshop was a step toward empowering some traffic engineers with the knowledge they need to do so.

Some street design treatments are misunderstood to be not allowed under the standards, when really they are:

Other things we learned at the meeting:

Thanks for indulging our extremely geeky post, and if you made it here to the bottom, congratulations! You’re a diligent reader. Let us know if you have any thoughts on all this.