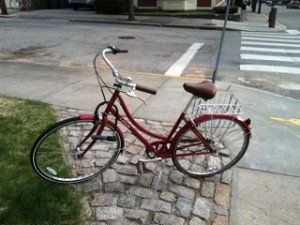 There have been rumblings online over the past week about who was going around cutting bicycle locks in Providence.  What started as a grassroots effort by Jack Madden, owner of Legend Bicycles, and led to an investigation and article by ecoRI, in which they report:

A call to William Bombard, acting director of the city’s Public Works Department, confirmed what Madden and others had been suspecting. Bombard said that, yes, public works was cutting bike locks in some instances.

and when Bombard was asked why, he replied

One of the staffers from traffic engineering noted locations where bikes were causing damage to signs, so he cut the locks so (the bikes) wouldn’t cause more damage,” Bombard said. “If the sign isn’t that sturdy, or if there’s an excessive number of bikes that are causing the sign to lose its structural integrity, rather than replace the sign, we cut the bike locks.

apparently this only applies to some signs, as

It is legal to lock a bike to a street sign, but cyclists who lock their bikes to damaged or leaning signs may be subject to lock cutting. Bombard said, “bikers should be cognizant of what they’re attaching their bikes to.

So rather than fix ailing infrastructure, apparently it’s now up to cyclists to determine whether the particular sign they are trying to attach their bike to is structurally sound.  Will the city be offering free civil engineering classes for all cyclists?  Should we then extend a similar policy to our motoring brethren?  In this is the case, perhaps we should just continue reducing the weight limits of bridges, with the expectation that motorists will actually head these, rather than bothering to fix the ailing bridges.  This will certainly extend the life of the existing bridges and reduce the long term costs.  I’m sure all will say this is far fetched, but is it not a policy in the much the same vein?

The issue will likely be referred to the Bicycle and Pedestrian Advisory Commission to discuss.  We have a couple of members who sit on this commission, so we should be able to get you some further updates.