The Case for Working With Your Hands

Joe Nocella designs buildings by day and bikes by night. 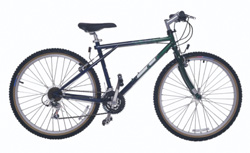 By day, Joe Nocella works in a tall, 1950s building in Midtown Manhattan for architecture giant HOK, creating virtual models of construction projects. By night, and on weekends, he repairs to his small, unheated shop, 718 Cyclery, on the edge of Brooklyn’s Park Slope neighbourhood, where he builds real bikes – involving equally demanding schedules, clients and just-in-time supply-chain coordination. Not to mention the occasional punter coming through the door with a dusty mountain bike that hasn’t seen the light of day in years.

Like many New York cyclists of a certain age, Nocella was a bike messenger in the 1980s until he had a career-ending collision. His riding quietly ebbed as he morphed into a father and nine-to-five architect. A few years ago, however, he had another quintessential New York bike experience: His was stolen. Instead of heading to a bike shop, he decided to put one together himself.

So enamoured was he of the process – the hunt for parts, the solving of mechanical puzzles – he built another. This drew concern from his wife (bike storage challenges space-conscious New Yorkers) and interest from his neighbour. “He asked, ‘you build bikes now?’.” He did, it seemed. “That’s how it started. I never made a business plan, I just let it see where it would take me.”

There was something larger. He was drawn to architecture, perhaps like many in his trade, through a desire to reconcile in himself some left-and-right brain schism of art and technology. But in his job, he found his work limited almost entirely to the screen, working on increasingly abstract projects. In bikes, he found that mix he had missed, the precision of threading sizes melded with the beauty of frame geometry. “It’s like architecture, but it’s smaller and I can touch it and it’s done in an hour – as opposed to a building which take seven years, and then it gets cancelled.”

Nocella’s story is almost archetypal these days – witness the popularity of Matthew Crawford’s The Case for Working With Your Hands, in which the disaffected author quits his job at a think-tank to pursue his true passion, motorcycle repair, leaving behind the creeping passivity wrought by corporate teamwork where “the individual feels that, alone, he is without any effect”.

Other shops are sprouting in Brooklyn, such as Bespoke in the Fort Greene neighbourhood, which offers custom builds and popular wheel-building classes. And who was I, as a person who spends days shifting bits around the internet, to be immune to this same hunger for physicality, this desire to understand how things work?

Which is how I found myself one evening in Nocella’s shop to do a “collaborative build” of a bicycle. Nocella wants to remove that haughty intimidation so often found in bike shops and to bring people into the build process. “In the age of buying the same iPod that everyone else has,” Nocella says, “people really like this idea that this is mine, that I designed it.”

As with architecture, the first step for Nocella is to suss out his clients’ desires. Like many, I wasn’t quite sure what these were. But as we talked, it emerged I was looking for something distinct from the procession of overly technical-looking mountain bikes and sturdily sober city commuters that my cycling life had become. Nor was I particularly fond of swoopy carbon-fibre road bikes. Budget was an issue. And then it hit me: what I was looking for – in the bike, if not in life itself – was a return to the graceful, lugged-steel frame simplicity of a Panasonic 10-speed road bike I had owned in the 1980s.

From here, it’s a series of questions: modern or vintage frame? New components or hunt for the rather paradoxical “new old stock” – vintage gear in unopened original boxes? Index or friction shifters? Geared, fixed-gear or single-speed? About 70 per cent of Nocella’s business, it turns out, is so-called “fixies”, bikes without gears (or often brakes), a style increasingly à la mode in relatively flat New York. “They’re cheaper, they’re lighter, there’s less maintenance,” says Nocella. “I have people coming to me and saying, I have all these gears and I don’t even shift anymore.” Yet with decades of gear-shifting built into my muscle memory, I wasn’t quite ready to quit.

The frame hunt was on. One of the virtues of well-built steel frames is that they’re virtually indestructible. Which means eBay and garage sales are awash in decades’ worth of good frames, often at a fraction of their original cost. After losing at the last minute on a beautiful red Masi frame, Nocella pointed me to a dark grey “Designer ’84” frame by another Italian company, Ciöcc, founded by the legendary Giovanni Pelizzoli. It had signs of use but looked dark, strong and sculptural. I won it for the eminently reasonable price of $300.

I faced another choice: repaint or leave as is? This is debated in internet forums with theological zeal. I went for patina, which lowered costs and gave me a bike that was largely new, but looked as if I could have had it forever. Then, days of agonising over parts, from bottom brackets to bottle cages. Next came the wheel build. This is where art and engineering come together, as Nocella and I lace the spokes in a “three-cross” configuration. “The simplest spoking pattern you can do is radial, like a wagon wheel,” Nocella tells me. “But you can only do that on the front wheel.” The back wheel not only bears more weight, but gets torque pressure from the chain – here Nocella, waving Gerd Schraner’s tome The Art of Wheelbuilding, launches into a physics seminar. Like a bridge, the suspension needs to be perfectly tuned: if one spoke is off, it will subtly degrade its neighbours, working itself into a wobble.

A few days later, the bike comes together before my eyes. It hasn’t been without its hiccups – the Campagnola chain required its own special (and expensive) tool, slightly but crucially different from the other (expensive) Campagnola chain tool Nocella already owned. Remarkably, however, the new gear, despite various changes in technology, fits perfectly on this more than 30-year-old frame (that little tab to hold the rear derailleur is still exactly where it needs to be), which speaks to the enduring sort of perfection of bicycle design itself.

“I’m an architect, and that job could go away tomorrow, they could outsource it to India,” he says. “There’s nothing I do at that place that’s unique. What I do here, you can’t replicate it – no one else has these bikes, nor will they ever.” Feeling a bit flush with the aura of this work of art in the age of mechanical reproduction, I hop on the bike, something greater than the sum of its parts, and ride home.