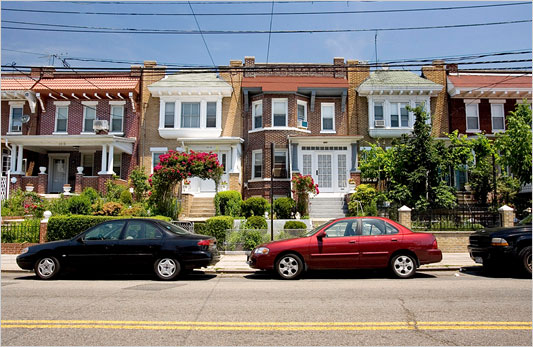 Older and better? (Kate Glicksberg for The New York Times)

Many people opt for newer homes because they are cleaner, bigger and often have more amenities. But new research shows old houses in old neighborhoods may be better for your health.

University of Utah researchers found that people who live in older, more walkable neighborhoods are at lower risk for overweight and obesity. The study, to be published in the September issue of The American Journal of Preventive Medicine, tracked the body mass index of nearly a half million Salt Lake County residents in Utah. They found that neighborhoods built before 1950 tended to offer greater overall walkability because they had been designed for pedestrians. Newer neighborhoods often were designed primarily to facilitate car travel, the researchers noted.

“It is difficult for individuals to change their behavior,” said Ken Smith, co-author of the study and professor of family and consumer studies at the University of Utah. “But we can build environments that promote healthy behavior.”

Dr. Smith and colleagues used census data as well as height and weight information obtained from the drivers’ license records of 453,927 Salt Lake County residents between the ages of 25 and 64. They found that men, on average, weighed 10 pounds less if they lived in a walkable neighborhood versus a neighborhood less conducive to walking. The average woman weighed six pounds less.

“The data show that how and where we live can greatly affect our health,” Dr. Smith said. “Neighborhoods with higher fractions of residents who walk to work tell us that something beneficial about the neighborhood is promoting health.’’

The research offers a blueprint for communities on better ways to design new developments to encourage healthful living. And for people shopping for homes, the lesson is to think about not just the house itself but whether the neighborhood is pedestrian-friendly, with sidewalks, bike and walking paths, low traffic and amenities like coffee shops or convenience stores that are within walking distance.

Last fall, Stanford Medicine Magazine also looked at the effect neighborhoods have on health. Researchers there found that among people who were trying to be more active, living in walkable neighborhoods dramatically improved their odds of exercising for at least two-and-a-half hours a week. In one study of people who were trying to change their exercise habits, 67 percent of people who lived in walkable neighborhoods achieved their goals, compared to just 30 percent of those who lived in pedestrian-unfriendly areas.