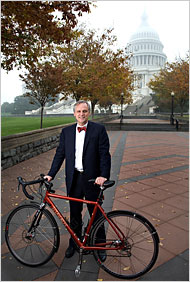 A Bicycle Evangelist With the Wind Now at His Back

Published: January 12, 2009
PORTLAND, Ore. — For years, Earl Blumenauer has been on a mission, and now his work is paying off. He can tell by the way some things are deteriorating around here.

“People are flying through stop signs on bikes,” Mr. Blumenauer said. “We are seeing in Portland bike congestion. You’ll see people biking across the river on a pedestrian bridge. They are just chock-a-block.”

Mr. Blumenauer, a passionate advocate of cycling as a remedy for everything from climate change to obesity, represents most of Portland in Congress, where he is the founder and proprietor of the 180 (plus or minus)-member Congressional Bicycle Caucus. Long regarded in some quarters as quixotic, the caucus has come into its own as hard times, climate concerns, gyrating gas prices and worries about fitness turn people away from their cars and toward their bikes.

“We have been flogging this bicycle thing for 20 years,” said Mr. Blumenauer, a Democrat. “All of a sudden it’s hot.”

But Mr. Blumenauer’s goals are larger than putting Americans on two wheels. He seeks to create what he calls a more sustainable society, including wiser use of energy, farming that improves the land rather than degrades it, an end to taxpayer subsidies for unwise development — and a transportation infrastructure that looks beyond the car.

For him, the global financial collapse is “perhaps the best opportunity we will ever see” to build environmental sustainability into the nation’s infrastructure, with urban streetcar systems, bike and pedestrian paths, more efficient energy transmission and conversion of the federal government’s 600,000-vehicle fleet to use alternate fuels.

“These are things that three years ago were unimaginable,” he said. “And if they were imaginable, we could not afford them. Well, now when all the experts agree that we will be lucky if we stabilize the economy in a couple of years, when there is great concern about the consequences of the collapse of the domestic auto producers, gee, these are things that are actually reasonable and affordable.”

All this might still be pie-in-the-sky were it not for one of Mr. Blumenauer’s fellow biking enthusiasts, Representative James L. Oberstar, a Minnesota Democrat, avid cyclist and chairman of the House Committee on Transportation and Infrastructure, which has jurisdiction over surface transportation.

“He’s been wonderful,” Mr. Oberstar said of his Oregon colleague. And as support for cycling grows, he said, builders, the highway construction lobby and others have stopped regarding biking as a “nuisance” and started thinking about how they can do business.

With an eye on the potential stimulus package, cycling advocates “have compiled a list of $2 billion of projects that can be under construction in 90 days,” Mr. Oberstar said, adding that prospects are “bright.”

In addition, after many attempts, this fall Mr. Blumenauer saw Congress approve his proposal to extend the tax breaks offered for employee parking to employers who encourage biking. The measure, which Mr. Blumenauer called a matter of “bicycle parity,” was part of a bailout bill.

Mr. Blumenauer has spent a lot of time on another issue that ordinarily draws little attention: the federally subsidized flood insurance program. The program serves people who own property along coasts and rivers who otherwise would pay enormous premiums for private flood insurance, if they could obtain it at all.

The insurance “subsidized people to live in places where nature repeatedly showed they weren’t wanted,” he said. They might be better off if they did not live there, he said, but “it’s un-American to say, ‘Get out.’ ” Politicians who should confront the problem “are betting Nimto, not in my term of office,” he said. They hope that disasters will spare their districts or, if they strike, that the government will come to the rescue, Mr. Blumenauer said.

A Portland native, Mr. Blumenauer, 60, has spent his adult life in elective office. He graduated from Lewis and Clark College in 1970 (after organizing an unsuccessful 1969 campaign to lower the state’s voting age to 18) and worked until 1977 as assistant to the president of Portland State University. In 1972, he won a seat in the Oregon House of Representatives. He moved to the Multnomah County Board of Commissioners in 1978, and from there, in 1986, he won election to the Portland City Council. Though he lost a mayoral election in 1992, he easily won election to the United States House in 1996 and has not faced serious opposition since.

Mr. Blumenauer entered Congress just after Newt Gingrich, the Republican speaker, killed a stopgap spending measure, shutting down much of the government, out of pique over his treatment on Air Force One. “Partisan tensions were very raw,” Mr. Blumenauer said. The bicycle caucus was “a way to bring people together.”

Sherwood Boehlert, a Republican and fellow bicyclist who represented upstate New York in Congress until 2007, agreed. When “partisanship was at an all-time high and tolerance of another point of view was at a longtime low,” he wore the bike caucus’s plastic bicycle lapel pin. “Bicycling unites people regardless of party affiliation,” he said.

In addition to bicycles, Mr. Blumenauer is particularly interested in public broadcasting and the plight of pollinators like honeybees. He is a founder of a “livable communities task force” whose goal, he said, is to educate members of Congress and their staffs on the benefits of transportation alternatives, open space, sustainability, vibrant downtowns, affordable housing and transparency in government.

Initially, he said, these interests marked him as “kind of left coast.” Not anymore. “They are becoming very mainstream,” said Adam B. Schiff, a Democrat who represents in Congress the area around Pasadena, Calif., and who, with Mr. Blumenauer’s bicycle advice, now regularly rides to work from his home in Maryland. “He has been way out in front of the Congress,” Mr. Schiff said. “Now the rest of us are trying to catch up.”

When Mr. Blumenauer is in his Portland district, he usually gets around by bike, cycling about 20 miles in a typical day. He has three bikes in Washington and five here, and he cycles in all weather, even in the unusual snow Portland has had recently. “In falling snow you can get some traction,” he said.

But the surge of bicycling in Portland has not been free of incident. The Oregonian newspaper and bloggers have reported on “bike rage,” drunken biking, hit-and-run bicycle accidents and other problems. Drivers complain about bikers who ignore traffic rules or hog narrow roads, phenomena some irritated motorists attribute to feelings of entitlement or moral superiority.

Mr. Blumenauer brushes off this criticism. “They are burning calories, not fossil fuel, they are taking up much less space, they are seeing the world at 10 miles per hour instead of 20 or 30,” he said. “And even though there are occasionally cranky or rude cyclists, they are no greater a percentage than cranky or rude motorists.”

Plus, he added, “they have really fought for their place on the asphalt.”