The folks over at Greater City Providence did a great job summarizing the alternatives RIDOT presented this past Monday for the Wickenden St./195 interchange.  I wasn’t able to attend the meeting and am hoping that anyone who was in attendance would add their thoughts to this post.  My understanding was that the following option was most widely accepted by everyone: 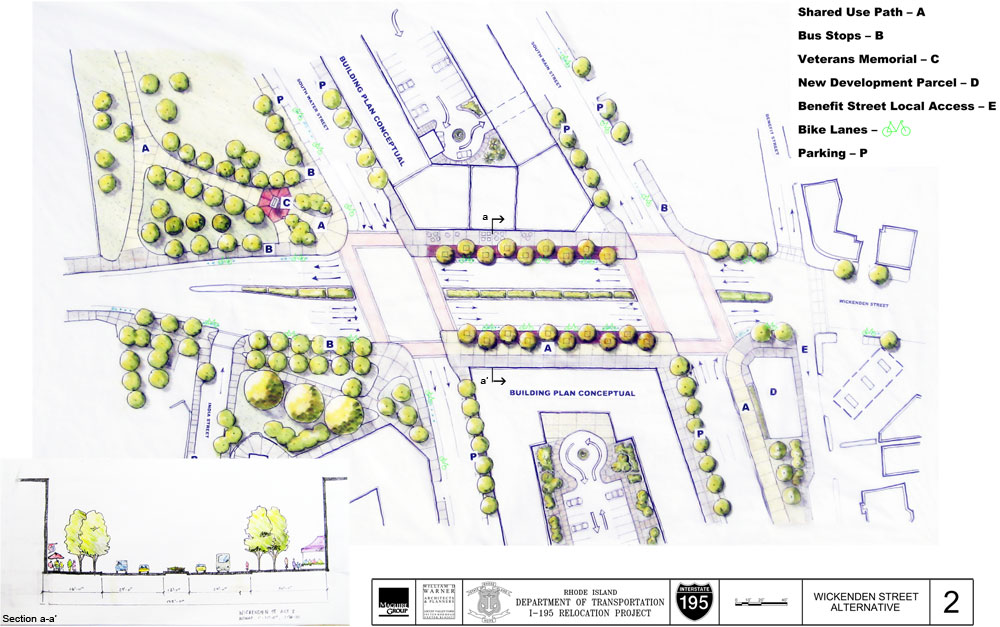 I’d encourage everyone to take some time and submit any thoughts or comments you have to either Melanie Jewett in the Planning Department and/or Lambri Zerva at RIDOT.  They will be accepting comments until the close of business on Tuesday, February 16th.

Looking at these designs, it’s still not clear to me how a bicycle is expected to navigate from the mulit-use path coming from India Point Park, through the intersection, and continue down to the bicycle path on South Water Street.  Clearly they are going to need to use the pedestrian signals, because crossing over two plus lanes of traffic, coming off at highway speeds, is going to be a death wish.  I just hope RIDOT has the sense to build some sort of large catchment area for bicycles, as people riding along paths can often be families with children.

I’m also seriously concerned about how RIDOT and the city plan to encourage motorists to slow down to the posted 25mph speeds after coming off the highway.  I don’t see any sort of traffic calming built into the plans.  I’m also dismayed to see that no thought, once again, has been given to HOV lanes in either direction.